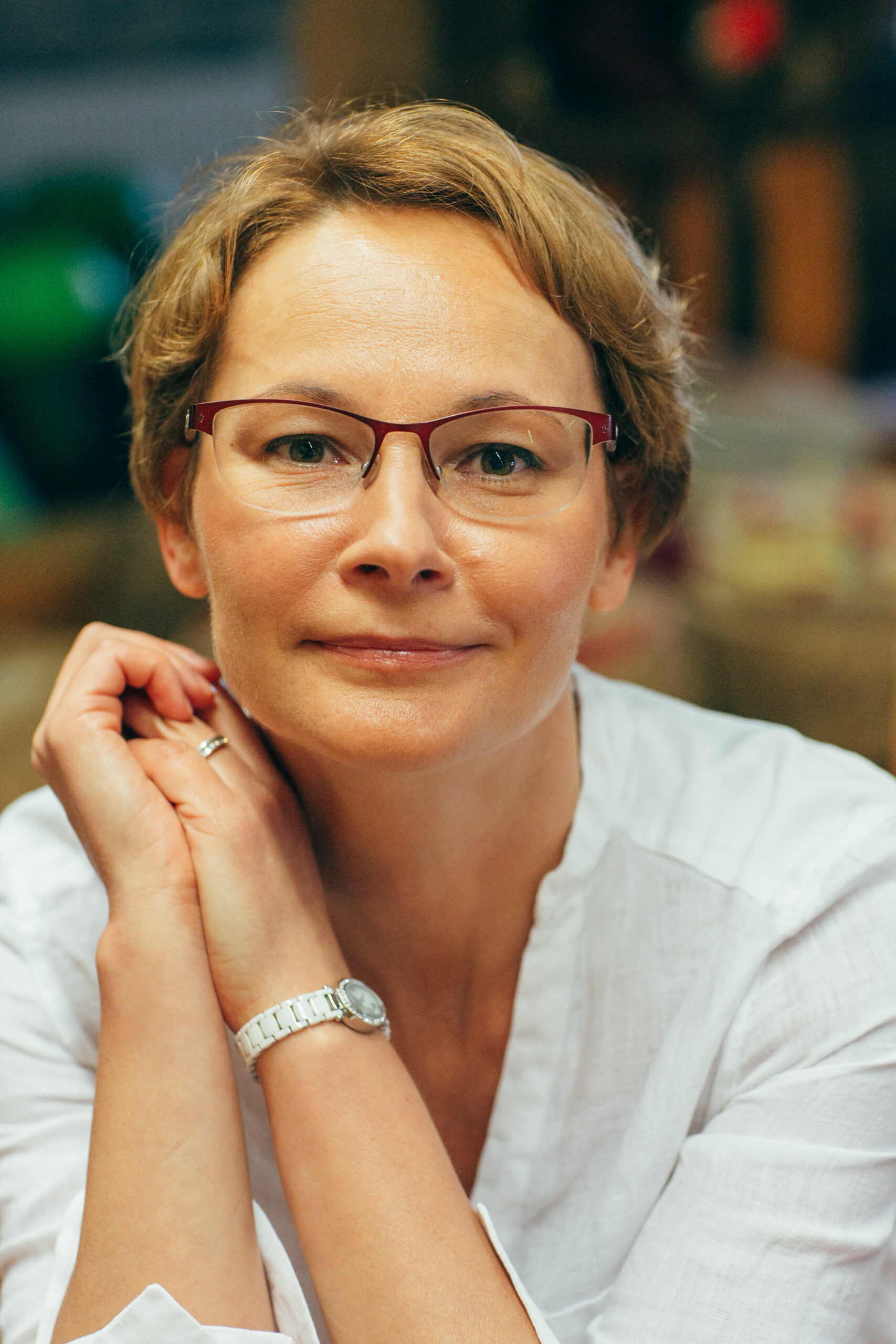 Kadri Hinrikus (1970) is a children’s writer and journalist. She graduated from Tallinn University in theatre direction, worked as an editor and news anchor on Estonian national television and currently works as an editor of the children’s magazine Täheke. Hinrikus has penned fairy tales and memoir-like books about her family. She is also a skilful teller of warm and humorous stories about kids’ everyday life. Her works were featured in the White Ravens catalogue in 2013 and 2016.

2016
The White Ravens (Daniel the Second)

2013
The White Ravens (May the Good Fairies Watch Over You)

2015
Kadri Hinrikus und Anu Kalm: Taaniel Teine (VivaVostok, German)
Kadri Hinrikus (1970) is a writer that Estonians are able to see almost every day – she works as a news anchor on Estonian national television and a TV journalist. Hinrikus graduated from Tallinn Pedagogical University as a theatre director. Her first children's book was published in 2008 and since then, she has had a firm place in Estonian children's literature.

Hinrikus is a writer who unites today with the past in her books, bringing distant times closer to children in a literary form, and thereby giving them an interest in the history of their country and their own family. This is illustrated especially clearly in her first book, Miia ja Friida (Miia and Friida, 2008), where two times run parallel – that distant past, in which the writer's father and mother and aunt lived as children, and that somewhat closer past, in which the writer herself grew up. The link between the two is the family's farm on a riverbank on the edge of a forest: every Estonian family's dream. Stories from Friida's childhood accompany the day-to-day of Miia growing-up, and through Friida's younger years, different facets of the part of Estonia's past that was forbidden to talk about just twenty years ago unfold before the children of today. Characters in this past include prisoners of war and forest partisans, raids are carried out frequently, and people aren't allowed to plant flowers in their gardens – otherwise, they could be labeled a kulak. Miia's childhood in turn coincides with the childhood of parents nowadays, and as such, the book is a dual excursion into an adventurous past for children of today. The illustrations of Urmas Viik, which enrich both worlds, add an abundance of true-to-life detail.

Kui emad olid väikesed (When Mothers were Little, 2009) is Hinrikus' second book, in which she also returns to mothers' childhood. These mothers, who were born in a free Republic of Estonia, went to school during World War II and graduated in the Estonian Soviet Socialist Republic. Eeva and Ingi live through those important years – a time of great upheaval for Estonians – while going through school; from the ages of six until eighteen, their lives run parallel. While at the beginning, they are still fleeing bombings and slipping little packages of food to prisoners of war, the erection of Soviet socialism in the spirit of Stalin's challenges is already in full swing. Hinrikus depicts the conditions and changing moods of the time truthfully and without giving her own judgment – what was, was; one just had to make do with it. As fathers had disappeared during the war – some imprisoned, some perished – something that sticks out is how a community composed primarily of women was left handling affairs around children after the war. The fact that Eeva and Ingli study at a school for girls, which was customary at the time, deepens this feeling. Kui emad olid väikesed gives a very good overview of life in Estonia during the 1950's wrapped up in literary form, and in addition to reading for fun, the work suits fantastically as extra material for younger school-aged children acquainting with Estonian history. Faithful to the time, materials left from that era are also used in the book's design – pages from children's rhyme books, postcards, pioneer handbooks, school textbooks, and other sources.

In her latest book, May the Good Fairies Watch Over You (2012), Hinrikus addresses the problems of children growing up motherless. In this story somewhat similar to Cinderella, eight-year-old twins Tuule and Uku are growing up with their father: their mother has passed away, and in the children's minds, has become a good fairy. Life just with their father is not easy. Their father must work for two, and when he is even home, he is simply too tired to do anything with the children. Meeting the children's' teacher brings joy back into their father's life, however, and life starts becoming ever more exciting for the twins. Their relationships with their peers improve, they find friends in the most unexpected of places, and even a rescued kitten can stay and live with them.

In the book, Hinrikus illustrates graphically, but without excessive didacticism, the importance the role that family plays in children's' lives, and the importance of the help that people seemingly not involved in a situation can offer a family that ends up in rough times. Take for example Tuule's so-called adopted grandmother, whose own grandchild lives abroad, but whose soul still yearns for fantastic little people. It's great when there is someone to bake apple pie for, and whose activities one can follow. Thanks to the cautious care of people surrounding a family that has ended up in a state of loneliness and sorrow, the motherless twins feel support and the warmth of home again, and their father has the strength to pull himself together.

Hinrikus is able to view a child's life in a broader sense not only within a modern framework, but also outside of it – in historical perspective. Thanks to background information she received from home, Hinrikus has the ability to find what is characteristic of youth from every age, and to give childhood a form suited for that particular time. While doing this, she also brings forth overall human values that are important to give a child for taking along in life, no matter in what time they may happen to be living.