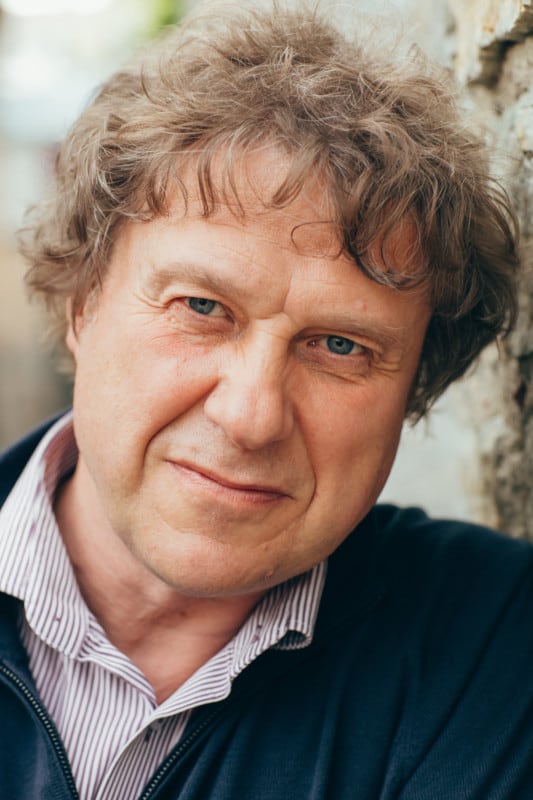 Juhani Püttsepp (1964) was born to a family of doctors in Tartu. He graduated from a special physics- and mathematics focus class at Tartu Middle School Nr. 1, acquired a degree in biology from the University of Tartu, and worked as a plant expert at the Institute of Zoology and Botany as well as at the University of Tartu. Püttsepp has directed the Tartu Children’s Theatre and edited newspapers Maaülikool and Roheline Värav and magazines Eesti Loodus and Loodusesõber. He has also been a journalist for Estonian newspapers Postimees and Eesti Ekspress. Additionally, he has made documentary films and composed summary books (such as Tartu Ülikool 375). Püttsepp has been Director of the Estonian University of Life Sciences’ School of Natural Sciences since 2004. He has five children.

Püttsepp has written works of popular-science and storybooks for children of many ages, although a number of his works can be classified as “books for the whole family” in the very best sense (Madonna the Board, Rooms Full of Dolls’ Stories, 49 Years Old, The Man Who Touched a Moose, etc.). His most treasured topics include nature, human attitudes towards the environment, the endurance of (local) culture, and the progression of generations. The author’s unique style weaves reality with fairy tale, and he always treats his characters with empathy.

2019
Children’s Story Competition “My First Book”, 3rd place (The Moon is Like a Golden Boat)

2008
The Knee-High Book Competition, 1st-2nd place (Stories of a Small Wolf)
Juhani Püttsepp: A Storyteller for the Defenseless

When Juhani Püttsepp published his first children’s book in 1994, Johannes the Artist’s Strange Stories, critics didn’t quite know what to make of it. The work, made in the symbiosis between writer and illustrator, was somewhat ahead of its time for Estonian literature and is more akin to the picture books on shelves nowadays.

Even though Püttsepp, who is a trained and practicing biologist, has written over two dozen books since then, each new title seems to baffle the public at first. It helps to keep in mind that he belongs to the old school of writers, who don’t worry about selling or marketing their books, but simply focus on what they do best. Regardless of his outward lack of ambition, Püttsepp has achieved a strong position in Estonian children’s literature. In addition to writing for children, he spends his time working at the Tartu Children’s Theater, penning nature articles, and creating documentary films and books for adult audiences. Every young person who delves into his books should probably have an adult nearby to answer questions that might arise.

Püttsepp’s storytelling is so direct and sincere that it feels like he’s sitting right next to you and narrating. This might be because he knows his audience well and is greatly experienced, being the father of five children. Many of his books are semi-autobiographical, such as Anni on a Journey (2005), in which an adventure is recounted through the eyes of a doll, and Sliding Stories (2014), which contains stories about the author’s true encounters with wild animals. Indeed, he has a particular flair for nature writing. In Stories of a Small Wolf, he attempts to rehabilitate wolves’ reputations from being greedy, evil fairy tale villains. By inventively placing a wolf side by side with a human child, he explains how they survive in the wild and shows that they’re simply trying to make do with the circumstances of their habitat. The Black Birds (2016) is a storybook that helps readers get to know the ways of jackdaws, crows, rooks, and ravens.

Many of Püttsepp’s human characters also need special care and protection: an asthmatic ghost in Niglas the Mill Ghost (2001), a feeble old woman in The Grandma Who Turned into a Puppy (2016), and a victim of domestic violence in The Story of the Little Oak, Anger, and the Crow (2015). The latter is the first Estonian book about this difficult and far-too-prevalent issue aimed at school-aged and younger children. Narrated by a little girl, it emphasizes that kids aren’t to blame for their parents’ quarrels and that everyone has the right to a peaceful environment that fosters growth – be they an oak or a little person. I Am My Own (2017) is based on true stories gathered from psychiatrists, and helps children to avoid situations that might be dangerous or put them into harm’s way. The book raises questions that might cross a child’s mind, such as what to do when someone hugs you against your will and how to behave when a stranger on the street invites you to look at puppies.

The Society of Gibraltar Ship Dogs (2015), which won the My First Book writing contest, whisks readers away to the streets of a little wooden slum town filled with people who are down on their luck. Anton lives with his grandmother and is one day joined by a reddish mutt named Saku. Püttsepp’s book helps young readers understand that it doesn’t pay to draw conclusions about others based on where they live, how well-off they are, or the things they’ve done in the past.

The author’s latest award-winning work is The Moon’s a Golden Ship, which is likewise based on historical events. Having gathered several accounts of Estonians who fled Soviet occupation in the 1940s, Püttsepp gives a voice to the children who were forced to abandon their homes. Although most Estonian books set in that harrowing period have focused more on deportation and repression, The Moon’s a Golden Ship explores refugees’ irrevocably lost sense of home despite living in prosperous new countries with little financial hardship. Püttsepp believes that a childhood can contain bright and heartwarming moments even if it coincides with tumultuous times. Growing up in peacetime is, however, a blessing.

Juhani Püttsepp is an empathetic author with a sharp eye for those who are in need and are powerless to defend themselves or use their voice. By using children’s literature to draw attention to such individuals, he is working to shape a more caring and unified society where everyone has a place, dignity, and a say in their own lives.