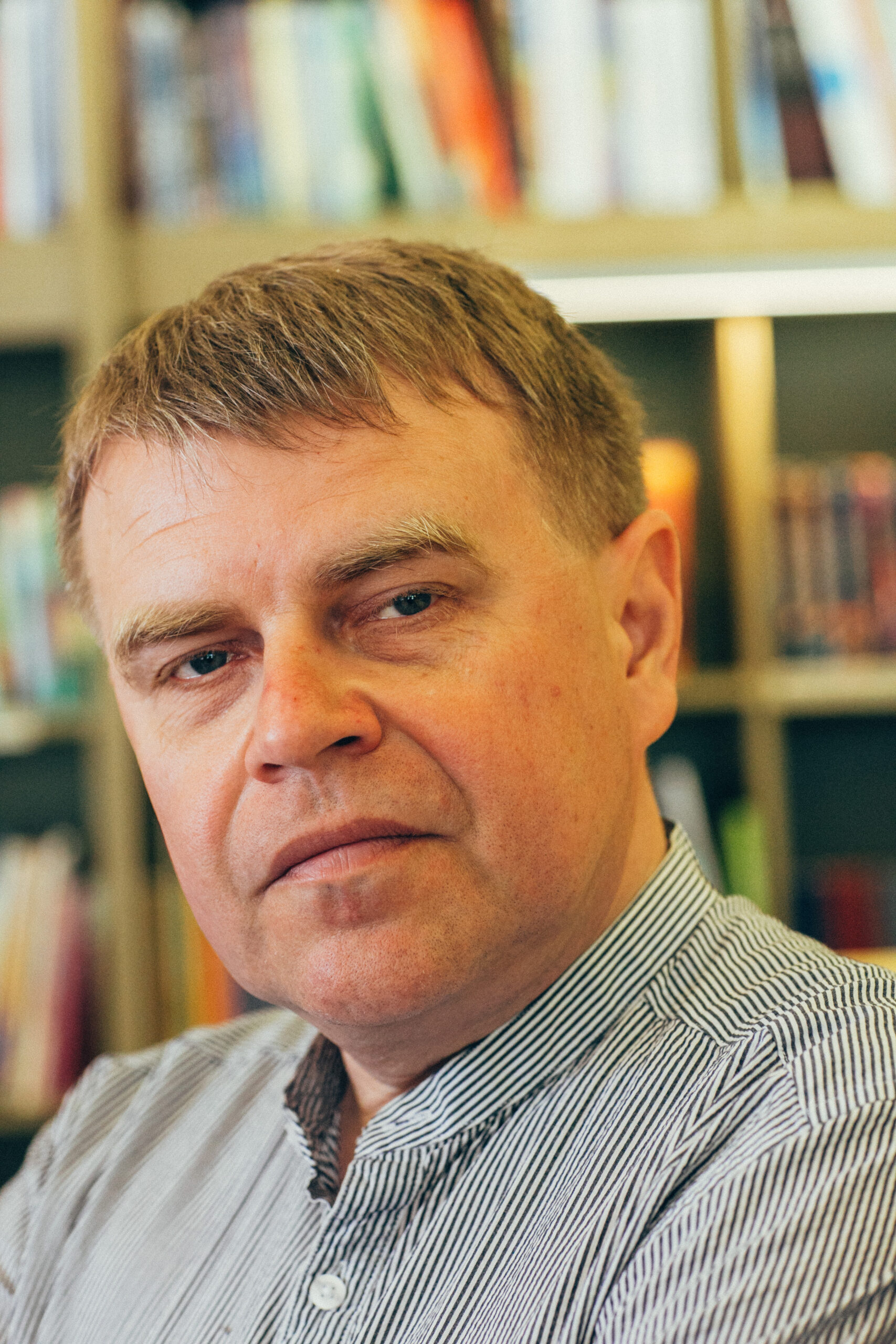 Andrus Kivirähk (1970) is a playwright, topical satirist, screenwriter and author of adult and children’s prose. He graduated from the University of Tartu in journalism and is the most commanding and prolific figure on Estonia’s literary scene today.

Kivirähk has won many major awards, including the IBBY Honour List in 2008. His children’s stories are known for their rich fantasy and unique humour. Kivirähk’s style is straightforward, his stories fast-paced, and their casts of characters colourful and filled with surprises.

When I think about Andrus Kivirähk's literary works, I immediately envision magic realism – but an Estonian version, in this case. He takes the Estonian landscape, its people, even things (such as the children’s novel Oscar and the Things) and puts them together with a very "Kivirähkesque" sense of humour, a touch of the unreal, animism, and an adequate dose of psychology. His style is light and simple, but it is the unexpected ideas and connections that make his pieces so unusual and loved by readers. (Anna Michalczuk, translator)

Kivirähk’s works have found their way into many different mediums and products, including films, plays, board games, and a theme park. The fact that he is a three-time laureate of the Nukits Award, which is picked by children, speaks for itself. (Mari Niitra, researcher)

2005
Estonian Children’s Literature Centre Raisin of the Year Award (Bed-time stories for Estonian fathers, together with the collection’s other authors)
“Järje Hoidja” Award of the Tallinn Central Library (Limpa and the Pirates)

Novels, novellas, plays, opinion pieces, and radio programs – Andrus Kivirähk is so active in so many different creative fields that it is difficult to classify him into any one category. Defining him in the field of children’s literature is no simpler. He has written plays, short stories, and longer prose for children, and has even been a co-screenwriter of several popular animated films.

The broad spectrum of Kivirähk’s creative works also means he doesn’t aim to prove himself or channel anything through his children’s literature. He writes only when he has no other choice, which is why every one of his works is pure gold. They quickly earn the favor of children and adults, often make a buzz in the media (intentional or not), and win one or more of a variety of Estonian children’s literature awards, for the most part. First print runs are closely followed by additional editions and translations.

Kivirähk entered the children’s literary scene in 1995 with his veritably revolutionary book The Giraffe. Its protagonist is a little girl named Kai, who embodies the new values of a new generation. Whereas Kai’s parents are practical-minded good eaters, the girl herself is picky about food, but has an imagination that makes up for her imperfection in terms of liveliness. However, as her parents fail to understand her vivid and rich imagination, little Kai feels quite alone. The tapeworm Tõnis – which her parents believe she has – understands the girl and helps her find focus in a lonely world.

Sirli, Siim, and the Secrets (1999) similarly addresses feelings of loneliness, but from a slightly different angle. The work emphasizes that the line between people with practical and more stimulating dispositions does not divide them by age. Both the children (Siim is a wizard and Sirli keeps company with cloud ballerinas) and adults (Mom is the queen of a castle and Dad is unbeatable at athletics) have their own respective worlds of secrets, as do most of the other characters. Only the writer Mr. Lamb has forgotten his dreams. His drab life only regains its color once he remembers the dreams he had in childhood.

Lotte’s Journey South (2002) set a precedent in Estonian children’s literature. Whereas it is common for literary characters to go from books to film reels, the opposite was true with Lotte. Just as in the animated film of same title (2000), the dog-girl Lotte lends a hand to her inventor father and an old explorer dog in helping the lost chick Pipo return south to his grandmother. Lotte the dog-girl is just like a human child – curious and hungry for knowledge, a little timid, and at the same time longing for adventure. She and all the other characters have their minor flaws but are good by nature – no one hurts or bullies anyone else over the course of the book. Could this be the reason why in addition to literature (the sequel Lotte from Gadgetville was published in 2006), Lotte has also become the protagonist of several children’s plays, ABCs books, and animated films?

Kivirähk’s children’s storybook Limpa and the Pirates (2004) also raised a furor, as it was commissioned by the large Estonian beer and soft drink manufacturer A. Le Coq, the corporate mascot of which is the pig character Limpa. Estonia’s media entered a heated debate about the relationship between children’s literature, advertising, and financing, in which Kivirähk was accused of selling out and abandoning his creative freedom. The author himself parried the criticism by claiming the protagonist’s name in no way affected the quality of his writing – which is likely true. In fact, Kivirähk’s characters particularly spice up the work – there aren’t many books in which pajamas are depicted as ferocious pirates in a crib-ship named The Dark Dream. The leader of the gang is a pillow who earned his stripes in the Pillow Fights and was hit by Treasure Island.

The title of Kivirähk’s 2009 collection of children’s short stories, which were earlier published in the media, received intense criticism as well – Poo and Spring. His similar collections Carnival and Potato Salad (2015) and The Ghost and Facebook (2019) were strong proof that the popularity of Kivirähk’s writing is guaranteed by more than just his choice of titles. The author’s witty short stories have clearly perceptible thoughtful undertones – they are tied together by a warm, heartfelt fantasy world populated by a range of colorful characters. No matter whether these figures constitute humans, animals, objects, fantastical creatures, or foods, the author treats them all with the utmost warmth and respect.

In Kivirähk’s children’s novel Oscar and the Things (2015), he returns to a familiar topic – loneliness. Oscar has finished preschool and is looking forward to his first year of school. However, he is first forced to spend three summer months living with his grandmother in the countryside while his mother receives training in the US and his father is at work. The boy has yet to forge any deep ties with the faraway relative whom he and his parents visited infrequently up until then. As is the case with many of his peers, Oscar’s mobile is like a security blanket. Alas, he forgets it at home and is overwhelmed by an even greater sense of abandonment without the electronic device. Luckily, Oscar manages to find a way out of the grim situation – he crafts a wooden mobile that allows him to speak to objects, which enriches the boy’s life and ultimately helps him connect to his grandmother.

The plot of Kivirähk’s latest children’s book, Tilda and the Dust Angel (2018), revolves around a girl named Tilda who lives with her widowed mother. Tilda’s father died when she was very young, so she has no memories of him. At the same time, her mother refuses to discuss the subject. When their home is left uncleaned for several days, Tilda is visited by the Dust Angel. In Kivirähk’s fantasy, dust is something that contains the past and memories. If it weren’t for dust, people would forget their feelings, where they came from, and would care only for the future. Then, the world would be pure and orderly like a computer game or a sterile hospital.

Indeed, none of Kivirähk’s children’s books are written simply for writing’s sake. Readers can easily tell that he crafts his stories with goals and thorough consideration, addressing important contemporary issues while still observing them from eternal standpoints. A light and positive feeling thus washes over you whenever you finish one of his works – everything fits. The world around you seems brighter, the sky vaster, and your worries trivial. It’s not uncommon for Kivirähk’s newest book to quickly disappear from bookstore shelves, forcing eager readers to wait for another fresh shipment from the print house. Do we really have cause to complain that children don’t read as much as they should? Is it possible they simply have high demands?